Note: copy for history from bountysource. It was my fault with zero funding, but I got some experience :).

I've been using Gmail for the last seven years. I wanted little privacy and no ads for my emails, so I tried to abandon many times, but always returned. I tried probably all possible alternatives and nothing could fit me as the best conversations made by Google.

I started Namail few months ago and it already has a pretty good public demo with narrow feature set: Gmail synchronization, conversations with some actions, search, etc. I can read all my emails through Namail interface and I really like it (sure, because I've been making it). I want to build the first powerful version in five months for replacing Gmail in my daily using.

Code is available on github and is first introduced here (it is still useful for additional information). 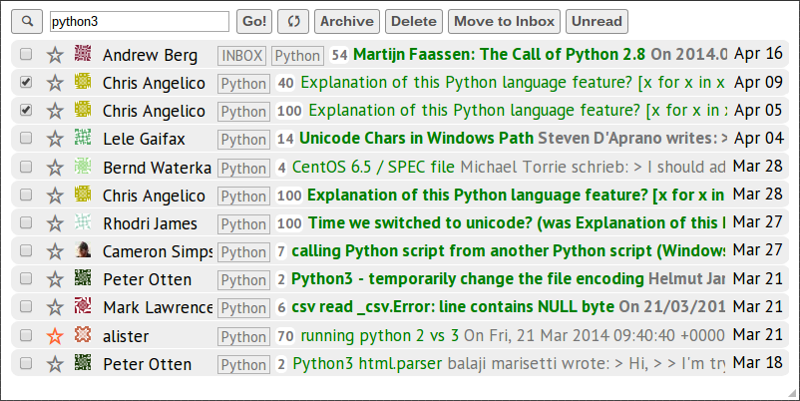 The main principle of Namail is simplicity.

When I need only a browser for webmail that's amazing. I have several daily use devices: laptop with small screen for all my work, iPad Mini for reading and surfing. So I want Namail to be really suitable for small screens and for big monitors as well (I have a big one for testing, but usually watch movies on it).

Why do I think I can do this?

I will work full-time on Namail in two iterations (each in two and half months).

The first iteration named "I've moved away from Gmail but with Gmail behind my back":

After the first iteration I suppose I will switch to Namail on daily basis.

Second iteration, named "Really, I have moved away from Gmail!"

After the second iteration I expect Namail to be a perfect alternative for others webmails.

My name is Grisha Kostyuk aka naspeh. My email is naspeh[at]gmail.com. I'm a passionate programmer from Ukraine with experience of about seven years in web development, more than four last years with Python. I usually work as a Python developer on full-time position (often remote).

Since April 2013 I have spent my time mostly on my own projects (including my newborn first son). Namail is the last thing I have been working on during the recent four months, including research, first prototype (which I gave up) and start of developing Namail from scratch (current version took about two months and half).

Now I have spent almost all the money I had and I need to get a job for supporting my family. But I want to develop Namail. Now I'm deep in the context of Namail, I have a lot of enthusiasm and this is the right time, because if I get a job I will dive deep in a new role and a new project and Namail may be late for about year. So I really want to work on email stuff and I need some money.